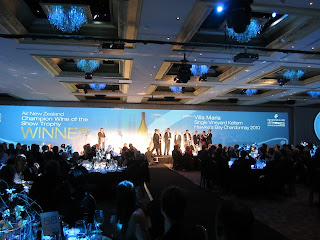 Those of you who follow my comings and goings on Facebook or Twitter can see that I'm in New Zealand at the moment. I came down here just about a week ago for the Air New Zealand Wine Awards in Auckland, which is probably the biggest event in the country's wine industry. Since then I've actually been visiting some of the winemakers that I met there at their own wineries in Nelson, Marlborough and Waipara, with Central Otago to come next week.

But the reason I came down here in the first place was to attend these awards and use them as a lens into the country's wine scene in general. So take a look on my piece from this week on Jaunted where I talk not only about the awards themselves, but also to some of the big names in wine down here (including two of the airline's wine consultants), give you a rundown of the events, and a look back at just how far New Zealand wines have come in the 25 years since the awards took their present shape (hint: Sauvignon Blanc was barely to be found back then, but now it makes up 75% of the country's grape crop!). 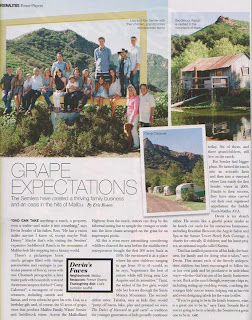 Though I normally cover dining (and soon travel!) and the occasional Polo piece (tee hee) for L.A. Confidential, I hadn't done one of their "Power Player" pieces...until I was asked if I'd like to do a write up on one of Los Angeles's best known families, the Semlers.

The Semlers, headed by patriarch Ron, are the irrepressibly quirky force behind Malibu Family Wines, and the very classification of Malibu as an American Viticultural Area. Their ranch is somewhat legend as a film backdrop, wedding venue, and all-round fantastical place that's home to prize horses, zebras and buffalo in the menagerie. Ron also has an incomparable collection of vintage automobiles and carriages.

All that's just scratching the surface of this close-knit multi-generational family, and the sprawling ranch that they inhabit way up in the wild hills of Malibu.

Unfortunately my article is not in the online version of the magazine, but I'm pasting the text below, and you should def… 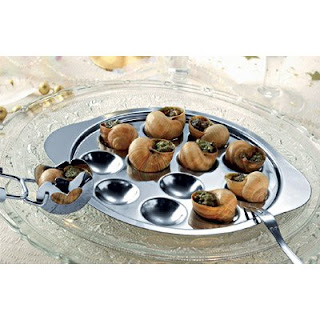 What's So Great About Burgundian Snails?

The Hierarchy of the Snail World

Escargot is one of the best known dishes of France. Who hasn't tried, or at least been forced to try, those rubbery little snails bathed in garlic and butter and stuffed into either a little cassoulet dish or back into their shells? Who hasn't fantasized about being Julia Roberts in Pretty Woman, shooting a shell across a fancy dining room with the force of a Howitzer?

Though escargot might appear to be the height of sophistication, or an exercise in daring dining depending on whom you ask, once people get past the idea of eating snails, they usually enjoy them as a tasty occasional appetizer without going into too much other detail.

Recently, however, while reading about the French region of Burgundy, I found out that the most prized escargot snails of all come from there, and that you rarely see them outside the fanciest of restaurants. What you normally get are just your run-of-the-mill farmed snails, called petits gris, or "little grays.&…

There's nothing worse than saving up your miles for an award ticket, redeeming them...and then finding out you'll still have to pay hundreds or even thousands of dollars in taxes and fees.
Find out how you can avoid them in my latest for Condé Nast Traveler: How to Avoid Huge Taxes and Fees When Cashing in Frequent Flier Miles